Awareness of the Cage

This is my favorite passage from Infinite Jest. It’s an exchange between LaMont Chu, one of the players at the Enfield Tennis Academy, and Lyle, a man who sits in the workout room and offers wisdom in exchange for licking sweat off of the perspiring students. Sounds weird, I guess, but it doesn’t really even register among everything else going on in this book. Emphasis mine.

Lyle has a way of sucking on the insides of his cheeks as he listens. Plates of old ridged muscle emerge and subside as he shifts his weight slightly on the raised towel dispenser. The dispenser’s at about shoulder-height for someone like Chu. Like all good listeners, he has a way of attending that is at once intense and assuasive: the supplicant feels both nakedly revealed and sheltered, somehow, from all possible judgment. It’s like he’s working as hard as you. You both of you, briefly, feel unalone. Lyle will suck in first one side’s cheek and then the other. ‘You burn to have your photograph in a magazine.’ ‘I’m afraid so.’ ‘Why again exactly, now?’ ‘I guess to be felt about as I feel about those players with their pictures in magazines.’ ‘Why?’ ‘Why? I guess to give my life some sort of kind of meaning, Lyle.’ ‘And how would this do this again?’ ‘Lyle, I don’t know. I do not know. It just does. Would. Why else would I burn like this, clip secret pictures, not take risks, not sleep or pee?’ ‘You feel these men with their photographs in magazines care deeply about having their photographs in magazines. Derive immense meaning.’ ‘I do. They must. I would. Else why would I burn like this to feel as they feel?’ ‘The meaning they feel, you mean. From the fame.’ ‘Lyle, don’t they?’ Lyle sucks his cheeks. It’s not like he’s condescending or stringing you along. He’s thinking as hard as you. It’s like he’s you in the top of a clean pond. It’s part of the attention. One side of his cheeks almost caves in, thinking. ‘LaMont, perhaps they did at first. The first photograph, the first magazine, the gratified surge, the seeing themselves as others see them, the hagiography of image, perhaps. Perhaps the first time: enjoyment. After that, do you trust me, trust me: they do not feel what you burn for. After the first surge, they care only that their photographs seem awkward or unflattering, or untrue, or that their privacy, this thing you burn to escape, what they call their privacy is being violated. Something changes. After the first photograph has been in a magazine, the famous men do not enjoy their photographs in magazines so much as they fear that their photographs will cease to appear in magazines. They are trapped, just as you are.’ ‘ls this supposed to be good news’? This is awful news.‘ 'LaMont, are you willing to listen to a Remark about what is true?’ ‘Okeydokey.’ ‘The truth will set you free. But not until it is finished with you.’ ‘Maybe I ought to be getting back.’ ‘LaMont, the world is very old. You have been snared by something untrue. You are deluded. But this is good news. You have been snared by the delusion that envy has a reciprocal. You assume that there is a flip-side to your painful envy of Michael Chang: namely Michael Chang’s enjoyable feeling of being-envied-by-LaMont-Chu. No such animal.’ ‘Animal?’ ‘You burn with hunger for food that does not exist.’ ‘This is good news?’ ‘It is the truth. To be envied, admired, is not it feeling. Nor is fame it feeling. There are feelings associated with fame, but few of them are any more enjoyable than the feelings associated with envy of fame.’ ‘The burning doesn’t go away?’ ‘What fire dies when you feed it? It is not fame itself they wish to deny you here. Trust them. There is much fear in fame. Terrible and heavy fear to be pulled and held, carried. Perhaps they want only to keep it off you until you weigh enough to pull it toward yourself.’ ‘Would I sound ungrateful if I said this doesn’t make me feel very much better at all?’ ‘La-Mont, the truth is that the world is incredibly, incredibly, unbelievably old. You suffer with the stunted desire caused by one of its oldest lies. Do not believe the photographs. Fame is not the exit from any cage.’ ‘So I’m stuck in the cage from either side. Fame or tortured envy of fame. There’s no way out.’ ‘You might consider how escape from a cage must surely require, foremost, awareness of the fact of the cage. And I believe I see a drop on your temple, right… there. …’ Etc.

I came up with this riff last night while playing with a couple friends. Twelve-bar blues in D minor.

A song from one of my piano books that’s been very satisfying to learn. 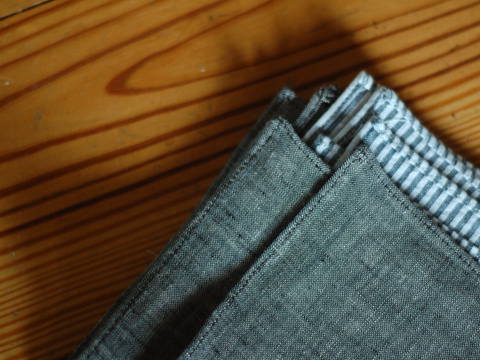 I got the chance to stop in at Need Supply Co. while visiting Richmond last weekend, and I really liked these Hill-Side Pocket Squares, though hell if I was going to pay $45 for a what amounts to a piece of fabric.

Instead, I stopped by a local fabric store and bought a few kinds of linen cloth, which I took to a tailor and asked to have cut up into 13" squares with the edges sewn up. I picked them up today, and I’m really pleased with the results.

Goofy little tune I came up with this morning. Follows a basic 12-bar blues progression, but keeps dropping out of key.

Men of the Other Type

Another golden nugget from Cryptonomicon:

MEN WHO BELIEVE THAT THEY ARE ACCOMPLISHING SOMETHING by speaking speak in a different way from men who believe that speaking is a waste of time. Bobby Shaftoe has learned most of his practical knowledge — how to fix a car. butcher a deer, throw a spiral, talk to a lady, kill a Nip — from the latter type of man. For them, trying to do anything by talking is like trying to pound in a nail with a screwdriver. Sometimes you can even see the desperation spread over such a man’s face as he listens to himself speak.

Men of the other type — the ones who use speech as a tool of their work, who are confident and fluent — aren’t necessarily more intelligent, or even more educated. It took Shaftoe a long time to figure that out.

I couldn’t stop thinking of this passage as I spent yesterday in an all-day planning meeting.

The chords for this one came together quickly. The lead line, not so much. Turns out I suck at both playing and recording electric guitar. Guess that’s what happens when you don’t practice for half a decade. In any event, hope you enjoy some yazz flute.

Basic Flamenco progression (Am-G-F-E). This is getting toward why I took up piano in the first place — really being able to fill out a chord.

Same C-Am-F-G progression as last time, but this time in 4/4 as opposed to ¾. My first time playing along with a metronome.

Spent awhile trying to come up with something different for tonight’s recording, but ended up with this. Similar note pattern to stuff I’ve done in the past, and the chord progression (I-vi-IV-V/IV-iii-ii-iii) is pretty derivative, but it sounds nice enough.